Doom, despair, and agony on me! 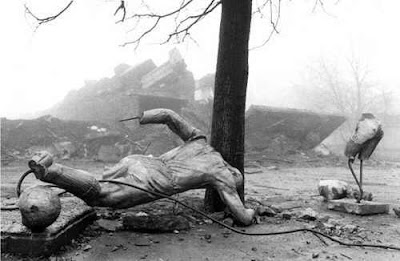 Golovkin put down his lukewarm tea, returning his attention to cleaning the Nagant revolver on the desktop before him. His colleagues carried the semi-automatic Tokharev, but this pistol had special meaning to Golovkin. It was the pistol he had picked up from the downed policeman in the streets of Moscow when it had all started in 1917. One could say it had made him the man he was today. Before the Revolution Golovkin had been a surgeon, wielding a scalpel. Now he wielded a small pistol with the same deft precision. A different tool for a similar task.

The reports from the Barrikady were not favorable. German artillery concentrations had blown a hole in the hastily fortified line. At present the Germans had a clear path to the Red House. Once they realized that fact they would attack again, in force. The Red House was the key to the Barrikady, and neither must fall. Hearing the creak of hinges, Golovkin looked up to see Major Ludinov looming in the doorway. Golovkin was not surprised; he had intercepted the Major's orders and altered them to suit his own needs.

"Comrade Commissar. May I come in?"

Ludinov was a huge man, a mill worker by trade. His family had owned a lumber production facility in Vitebsk, before the Revolution. Despite his bourgeois upbringing Ludinov had proven himself useful. Where so many others had cracked and broken in the defense of Stalin's City, Ludinov had been tempered. Time and again he had thrown himself and his men against the invaders, destroying them without mercy. Ludinov's men would follow him into hell itself.

"Please sit down, Piotr Sergeyevich. Would you care for some tea?"

"Thank you, Comrade Commissar, but I would prefer to stand. My time is short, as I must prepare to leave at once. I have been ordered to the Barrikady. The ferry departs in ten minutes. It is my obligation to inform you of this."

Golovkin replaced his pistol in its holster. He pushed back his chair from the rickety desk and stood to face the Major.

"I am fully aware of your orders, Major. I will be accompanying you to the front. The men there need...resolve. I should think that, between you and I, we should give it to them."

October 17th was a menagerie of horrors for the Russian defenders.

Eschewing the western approach, the German opted to purchase one Rifle Company and a module of Preregistered 150mm Heavy Artillery directed by an off-board observer. The German attack plan was straightforward: smash the fortifications in The Corner with heavy artillery, follow-up with the Sturm Company and creep forward with the remaining troops hex-by-hex toward the Manufacturing Hall. The smashing was relentless. Of the reinforced company defending The Corner, a half-dozen dazed and terrified teenagers were all that stumbled back to the line. The rest had simply ceased to exist.

By the end of the day, the German had pushed forward to the ravine at Z8-AA8-BB8-CC8 and even managed to create an isolated pocket of German-controlled territory in the buildings immediately south, including the Chemist's Shop. Over half of the Manufacturing Hall, and all of the locations in The Point, fell to German control. Building B12 remained in Russian hands and, fortuitously, the fortifications supporting it remained intact. All in all, a solid Day One success for the German.

At first glance, the Russian position looks to be frighteningly weak. One AT Gun was destroyed outright, and the remaining Gun has no crew. The majority of the Russian support weapons were captured or destroyed. There are only 4 Russian leaders remaining to support the entire front. An entire company of infantry was lost. The German has a foothold in the factories and occupies the Chemist's Shop. Yikes!

Yes, all of that is true and losses were grave. However, I've played this game enough to know that Russian losses are always grave on Day One. It's part of the experience. Looking ahead, not all of the news is terrible.

Preregistered Heavy Artillery with an Off-board Observer costs 8 CPP - more than half of the initial German total. It packs a mighty punch, but there is a steep price to pay for that punch beyond mere CPP. Most German purchases on Day One include a Sturm Company, giving the German two-dozen 5-4-8 squads with which to attack. Typically, anywhere from 15-20 of these survive the day's action and are available for on-map set-up on Day Two. This allows the German to follow up on his Day One success by immediately pressing the attack on Day Two.

Purchasing Heavy Artillery precludes acquiring a second Sturm Company - there are only enough points left over for a Rifle Company. What this means is that my opponent has only eight 5-4-8 squads on board to begin Day Two - and two of those are in an Isolated pocket. The remainder of his forces comprise 4-6-7 squads, which are not at all cut out for assaulting the factories. The German will most definitely buy a Sturm Company - maybe two, if he rolled well for CPP - but these will have to enter from off-board and will spend at least one or two turns moving into position before attacking. That gives the Russian defenders ample time to reposition to meet them.

Because Weather is Overcast on October 18, the German may not purchase Stukas. This is a huge relief, because Stukas overhead severely restrict the Russian's ability to move outside the factories. If the German weights his assault to one side or another I will at least be able to move reinforcements to where they are needed.

The Chemist's Shop is Isolated

The pocket formed by the Chemist's Shop and the Z10, BB9, BB10 and CC10 buildings contains a 7-0 leader with a 5-4-8 squad and two 2-3-8 half-squads. The German must move forces into this pocket in order to hold it. The pocket is a salient, and will be hard for the German to consolidate without committing significant assets. My opponent only starts with 31 squads on board, so if he lines up to take this pocket he will be very weak elsewhere.

The Russians Can Reinforce

Russian troops are inexpensive, and losses can be replaced relatively easily. I will discuss this in more detail with my next post, in which I reveal my plans for the defense on Day Two.
Posted by UnitFour at 8:40 PM