Pig after pig, cow after cow, village after village, army after army... 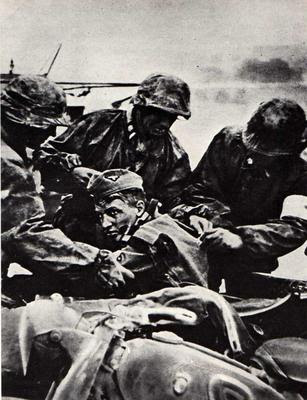 This battle was much like the last: three yards and a cloud of dust, to coin an Americanism. My plan was to execute a pincer attack, enveloping the Russians in the factories so as to reduce them over time. It didn't go down like that.

The Germans encountered problems immediately. The 80mm artillery did pretty much nothing before the field phone gave out. In the south, the Russian had hidden a few 6-2-8s in exactly the right places to stop my advance in its tracks. I fought through them, and was barely able to get in position in front of the reinforcing Rifle Coy and its supporting tanks. There were Russian infantry squads behind me as well, so as soon as I got into position I had to start a fighting withdrawal from it. The net result is that things stayed essentially the same in the P33 factory: I had the southwest two-thirds and the Russian held the northeast corner.

In the middle of the map the 150mm artillery wandered all over the place, doing very little until late in the game when it landed on the trench complex. In the S17 factory things went very much as before, with the perimeter not changing very much. The 10-3 did manage to blow a normal morale check and leave a pile of machine guns for the Russians. Elsewhere not much happened until my reinforcing Rifle Coy arrived. They were able to force their way into the P21 factory and trade blows with the Russians there. It didn't seem like much was accomplished - the perimeter wasn't advanced very far - but I think I did some damage.

In the north, the Russians tried to push out of the Chemist's Shop into the northeast corner of the S11 factory. They didn't get very far, and the net effect was to create a Berserk 4-6-7 that charged the dug-in KV1 M42 and destroyed it in close combat.

When all the dust settled, the perimeter looked almost unchanged and the casualties were thus:

In the Refit Phase I battle hardened five 4-6-7 squads and one 9-2 leader. The German ELR remained at 4; German SAN remained at 2. I rolled [4-4=0] for CPP Replenishment and received 18 CPP.

Here is the Day Six perimeter: My last two attempts at turning the corner on the Russians failed badly. (Why is there a voice in my head saying: "Precisely, Blackadder! That's why Ivan would never expect a third such attack!"). Sorry, but I have to decline. My opponent feels upbeat about his situation, but there are a few factors that I don't think he has considered fully:
The window is still very much open for the German. I hope to be able to put together one or two good days and win the campaign.

The Russian set up has a few interesting features. 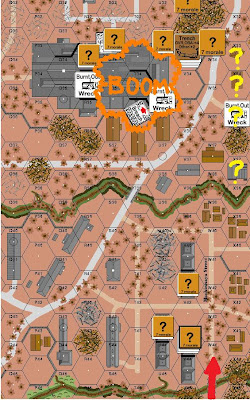 I find it odd that Dade would stick at least three squads way off in the corner of the Housing Complex. I think these squads are there to prevent the Germans from encroaching on hex W45, which is a very useful place to enter reinforcing tanks.

I also find it odd that there is very little set up to the east of the P33 factory. In the last game, this is where the Russian ambushed my flanking attack. It seems likely that there are more units hidden here on Day Six. Backstopped by a dug-in T60, it would be a much harder task to attack in this direction.

Also, I know for a fact that there was a retained artillery module most likely aimed at the P33 factory. I haven't seen Dade reach for his large caliber artillery since Day One, and I'm a bit concerned that some 120mm OBA is waiting to land on me. 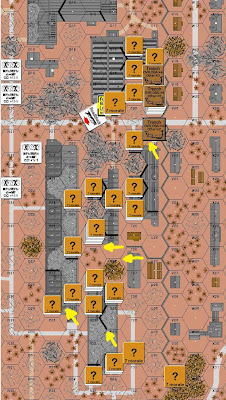 I think that most of these units are Conscripts, with a few better-quality units sprinkled around to give them some spine. I know where one Gun is; it's in a Fortified Building hex in S20 and cannot be moved. The other one could be anywhere. I've marked in yellow some of the places that seem likely. The dug-in T60s in the south will be troublesome.

Once again, Dade has loaded up the Chemist's Shop but has left a wide-open lane to the Commissar's House. I don't know what to make of that, unless he intends to stage another diversionary attack to keep me busy in the P11 factory. The last one didn't pan out so well for the Russian. He appears much too week in the X14 - X19 building cluster, which makes me think another ambush is waiting for me there. 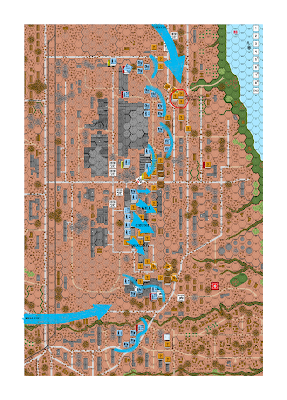 I aim to avoid repeating my mistake. I am going to stay away from the dug-in tanks and I am not going to expose any flanks. My objective is to beat the Russian bloody.

The objective here is to hold what I have and avoid taking chances. The observer for the 80mm OBA is on the rooftop in V40. His task is to interdict Russian reinforcements as they rush toward the P33 factory. I plan on dropping a spotting round in hex CC34 on Turn 1 and then see what happens on Turn 2. If no reinforcements come, then I will drop it on the dug-in tanks. The units south of the gully and those in the factory are going to hunker down and wait for elements of the reinforcing Rifle Coy.

KILL. CRUSH. DESTROY. There is very little subtlety to this plan: line up my 5-4-8s with my best leaders and start hosing down anything that moves. I am taking a risk by putting the 10-3 on Level 2 in hex P18. From there, he can bring fire to bear on some very important Russian hexes such as R25, R27 and T23 - and, of course, all of the Chemist's Shop. However, this is a likely hex to be preregistered for artillery. I've studiously avoided such overwatch positions so far. Maybe my opponent will not expect me to use it today.

The plan here is to try and draw the Russians out of their positions. I've lined up a bunch of squads out in the debris field. I hope to drop Smoke from the 80mm MTR on the tank in V8, then assault move a concealed 5-4-8 next to it. Assuming the 5-4-8 survives defensive fire and makes it's PAATC, I might be able to bag one of the T34s in close combat. If I can get one of them, the other will have to make task checks to move (owing to its lack of a radio). That won't be easy with an Inexperienced Crew. Meanwhile the 9-1 will be directing two MMG from the upper level of N5 and will ideally be able to break some of the units in the U5 area.

I plan on holding the reinforcing Sturm Coy off board until Turn 2. Hopefully the Russian will get aggressive and make a move toward the factories and out of his prepared positions. If I can maintain the element of surprise, my Sturm Coy with its 10-2 leader should be able to take the Chemist's Shop.
Posted by UnitFour at 8:13 PM