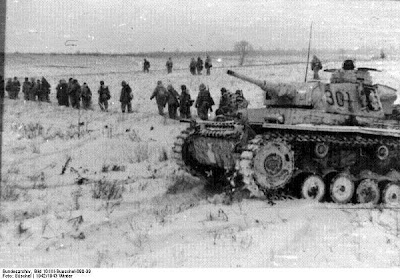 The day started badly. In the north the 81mm MTR was only able to place one Smoke counter in Z17. As a result, when the 9-2 was moving through hex Y13 the hidden 9-1 and Russian .50 cal HMG opened up from the upper level of CC19 with an 8 FP attack. Snake eyes; everybody dead. Yikes.

However, things quickly started looking up. My reconnaissance revealed a dug-in T70 in W18 and a HIP T-34 in U18. My first salvos of fire pretty much shattered the first line of the Russian defense. I was able to chase the tank out of the S17 factory and clear it of Russian defenders. As the Pioniers ground forward through the factories the sturm troopers pushed down behind them. I avoided activating any Reserve units and severely punished the Russian defenders. Two of the T-34s had been destroyed and the third was Immobilized and tied up in Melee with an 8-1 and an 8-3-8 when my opponent conceded on Turn 6. Two Stukas had just arrived, but they did not get a chance to take part.

This shows the furthest advance of the German forces and the approximate positions of the Russian defenders at the end of the game: 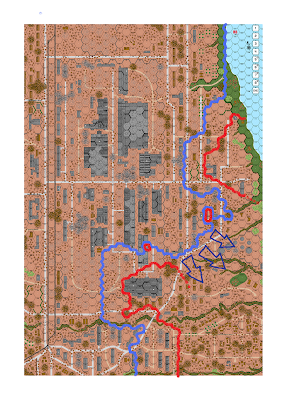 German troops had surrounded the AA25 building and were preparing to destroy everything inside it. There was nothing between the German line and the southeast corner of the map. If the game continued beyond Turn 6 the P33 factory would have been effectively surrounded and cut-off from possible reinforcement. The next campaign game day was going to feature at least one module of Heavy Artillery pounding the P33 factory while kill-stacks manned by 10-3s, 10-2s and 9-2s held off any counterattacks. With this looming the Russian conceded.

The entire tone of this campaign game was set by the relative performance of the German and Russian Rocket Modules on Day One. The German Nebelwerfer drifted to the most optimal hex possible, and completely wrecked the Russian defenses in front of the Power Station. This allowed me to assert my armor and blow open the line. Taking the Power Station on Day One is not an easy task, and I was able to do it this time around.

Meanwhile, the Russian Katyusha just missed totally disrupting the entire northern half of my attacking force. Had it drifted in a more fortuitous direction - or, God forbid, drifted to an optimal hex - I would have been in real trouble. As it happened, though, the four points Dade spent on the Katyusha module were more or less wasted. Those points would have served the Russian much better were they spent on a Militia Coy or SMG Coy. Not buying those extra troops, and not extracting a heavy price from the German with the Katyusha, contributed greatly to the manpower shortage the Russian faced throughout the game.

Usually in Red Barricades the German troops are superior in quality but badly outnumbered. When the German stages an attack, there is usually the threat of a Russian counterattack wherever the German is weakest. This threat helps keep the German honest and limits his options.

In "normal" Red Barricades games the Russian force grows and grows until it's so huge that the German has no chance of beating it. Somehow I prevented this from happening and was able to win.

3. The Riverbank in CG I

The riverbank (i.e that section of the map east of hexrow U and north of hex coordinate 11, approximately) is a huge weight around the Russian's neck. He can't afford to leave it undefended, but at the same time the German has the option of completely ignoring it. This makes it very hard to invest resources to defend the riverbank, and very hard not to. When I finally took the Chemist's Shop (building W10) it opened the door for my Day Seven flank attack that won the game.

In CG III the riverbank must be addressed by the German, because it contains victory locations. Therefore any resources invested in long-term defense cannot be ignored by the German.

Our next foray into the Barricades won't be for a while, but we are considering tackling CG III with some modifications:

Our analysis is that the resource management phase of the CG contains a great number of subtle elements that pile up to make a German victory impossible. The modifications above are a starting point for a discussion regarding how to make CG III balanced. Maybe we will figure it out.
Posted by UnitFour at 6:12 PM