Another Day in Paradise 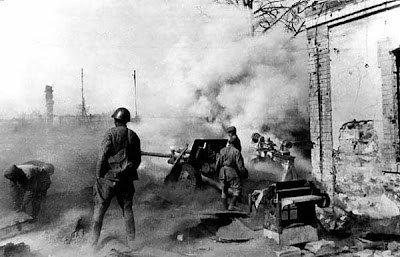 The Germans prosecuted what my opponent calls a "vanilla" attack - right up the gut toward the factories. All three German companies pushed through the NW corner of the factory complex and succeeded in gaining a toehold in the L10 Foundry Hall. Both sides scored essentially the same number of CVP: Russians 27, Germans 28. The Russians lost both AT guns and an HMG, which was unfortunate. No Russian squads battle-hardened, but the 7-0 leader improved to 8-0. Russian SAN dropped to 3. I was lucky and rolled 18 CPP for reinforcements.

The threat to the Chemist's Shop is nearly identical to that it faced on Day One. Now that the German has seen the locations of the pillboxes and hidden dug-in tanks, my chances for laying a trap are diminished. I placed a number of dummy cloaking counters in a forward position around my artillery's pre-registered hex (V3). If anything, I hope that these might at least give pause to the German attackers and perhaps soak up some artillery fire that might better be directed toward the pillboxes or the Chemist's Shop. Behind the cloaking counters I have the dug-in tanks retained from Day One and a smattering of infantry in and around the pillboxes. I have three 4-4-7s and a 9-0 Commissar HIP in the Chemist's Shop, as insurance against disaster. They might still be buried in rubble if the building is zeroed in by German guns.

The two companies of fresh Militia have been given the ugly task of being destroyed in the factories. Whatever squads survive the potential rocket barrage will have to keep the Germans from pushing out toward the Chemist's Shop and prevent them from taking the O18 building. The street running between the O10 Assembly Hall and L10/L14 Foundry Halls will likely be swept by MG fire, so crossing it is to be avoided if at all possible. The Assembly Hall is usually a charnel house for the German, and I hope the trend continues.

The Power Plant (J21) is the key to the early defense of the southern portion of the complex. The Rifle Coy in Reserve is set up in and around this building, with a few "live" squads on the flanks to slow down the German advance. I've dug-in three HIP T-34s (O22, I25 and E24) to back them up. Hopefully he will deploy his tanks here aggressively and the T-34s will destroy them. I've also placed a 9-1, 4-4-7 + HMG, 4-4-7 + MMG on the first level of C28 to protect the western approach . 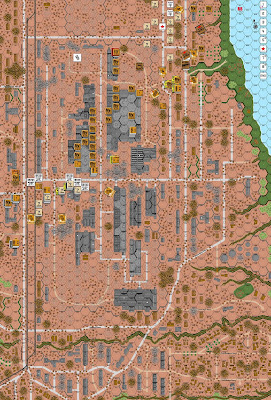 Nothing to do now but wait.