It's Gonna Be Messy 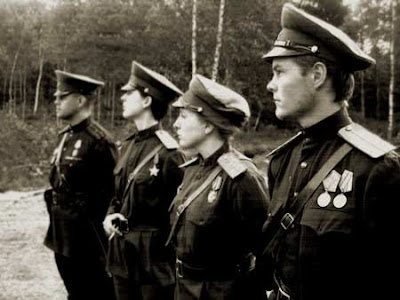 After considerable thought, I decided to select the "Idle" chit for Day Three. After suffering significant casualties the day before, I thought the odds reasonably in favor of the Sixth Army choosing to go Idle themselves. Were I to catch the Germans napping, and hit them with a surprise Night Assault, I might win back some crucial terrain and make Jerry bleed for it all over again. However, knowing my opponent, my thoughts could easily lead me astray. So I chose the safer option, and strengthened my defenses. This proved prudent, as Dade surrendered to his aggressive instincts and chose "Attack".

I wanted to have a flexible dimension to my defense, so I purchased the T-34 platoon at full price. If the German overloads one flank or another, the tanks can rush to assist. If a weak point presents itself, the tanks may be able to lead a limited counter-attack.

The Battalion Mortar is pre-registered to strike the staging area for a German assault on the Chemist's Shop. The 9-2 is tucked behind the defense in an overwatch position along with two 4-5-8s toting HMG; their job is to prevent a push up Pribatayinskaya Street.

The majority of the Guards SMG Coy is deployed around the Power Station to protect it and the two dug in tanks nearby. I've eschewed a stiff defense of buildings west of the railway. There just weren't enough squads to make for a decent fight and I had other priorities (see below). A 9-0, 4-4-7 + MMG, 4-4-7 + LMG(g) are in level one of G23 to interdict movement down the A-D hexrows toward building C23.

As always, the conscripts are arrayed in a two-deep line within the big factories. The fact that the O10 Assembly Hall is Gutted will help them survive a bit longer. Their job is to keep the Germans out of P18. As added insurance, the cloaking counter in P18 contains a 9-0, 3 x 6-2-8 and a DC. If activated, they can provide a bit of a counterpunch.

What I think will surprise Dade the most is the way I bolstered the line down by the riverbank. 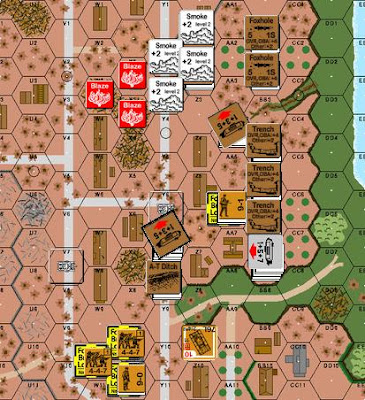 In past games, I've toyed with the idea of building a bunker complex in this corner of the map. I've always ended up moving the fortifications westward, abutting the pillboxes against the wall surrounding the big debris field. This time, given the position of my first two pillboxes, I thought that hardening this piece of real estate has the potential to cause a few headaches for the German.

I first had to consider how I would cope with the Germans occupying building Z1 and setting up a powerful fire base there. The Wind Force/Direction roll (RB 11.6241) gave me my answer. Drifting smoke just covers both hexes of building Z1. Fully expecting the German to take this building, I placed two conscript squads in the cellars of Z1/Z2. Because of the adjacent wall, no LOS exists to the cellars from W1 or XO. Any fire from adjacent hexes is at +6 and is halved. Any Germans advancing into the building must cross a wall and add +1 MF for Smoke, making for an Advance Vs. Difficult Terrain and resulting in CX status. CX Germans are susceptible to ambush by concealed Conscripts. These facts will make the German second-guess moving into the building, and once they clear it any fire out will be at +3 for Smoke.

Two hexes back from building Z1 I have placed two 1S foxholes holding a 4-4-7 each. Their job is to bottle up the Germans in Z1 and lay down fire on Leninskii Prospekt. Just to the south of the gully I have placed three trenches as the backbone of the defense. On the north end is the 1-3-5 pillbox placed on Day One. It's job is to help contain the advancing Germans in Z1. In the middle is a stone building that I have Fortified. A 9-1 and 4-5-8 + MMG are set up here to cover the X6/X7 approach to the Chemist's Shop and to stave off an attack on the trench complex. In the south, I've added a 1+5-7 pillbox containing a 9-1, 2-3-7 + MMG, 2-2-7 + MMG. They have a good LOS to V9-W8-X8-Y8-Y9 and should prove troublesome to any Germans trying to move on the Chemist's Shop through those hexes. The trenches themselves are manned by 4-4-7s with a LMG and a Lt MTR.

The 1+3+5 pillbox in Y7 contains the wounded 9-1 and a 4-4-7 + LMG. The AT ditch holds a 4-4-7 + Lt MTR. Their jobs are to lay as much interdicting fire as possible on Leninskii Prospekt and go down fighting. If possible, they are to make their way into the Chemist's Shop or back to the trench line. Either is unlikely.

The idea of this defense is the maintain a strong base of operations north of the Z8-CC8 defile. As long as the Russian can set up there in force, any Germans in the Chemist's Shop are threatened. If the German decides to spend the points to erase the fortifications with heavy artillery, then so be it - the line can be recast just north of the defile. Make the German fight for what is essentially worthless terrain. Every turn that he doesn't eradicate the bunker complex is a turn that it becomes stronger and deeper.

Here is a picture of the overall defense: 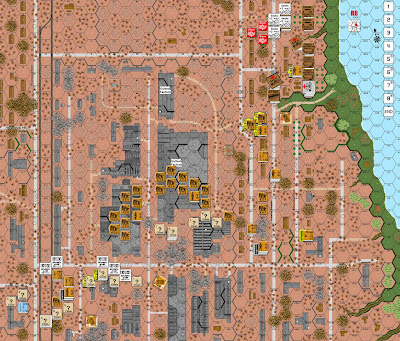 I've given up trying to predict exactly what my opponent might do. To be honest, it doesn't matter - I've got to plan for multiple contingencies in any case.
Posted by UnitFour at 8:18 PM