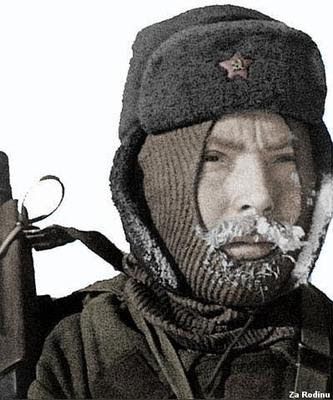 The day started with a German Nebelwerfer barrage. The rocket strike was targeted at the Chemist's Shop (Preregistered Hex: X8), but it drifted three hexes to AA7 and had a devastating effect on the Russian defenders in the trenches. The German followed up with a platoon of Pzkpfw IIILs entering from the north edge and overrunning the squads in BB1 and BB2. Between the armored hammer and rocket anvil, a company of Russian riflemen was smashed. One of the 9-1s managed to escape, round up a few errant squads, then - in utter folly - climb the cliff in BB8 to engage the Germans who now inhabited the pillbox in BB7. They managed to kill a broken 5-4-8, but did not survive the experience. All in all, a disastrous pummeling. The one saving grace: there was no attempt by the German to put pressure on the Chemist's Shop and it remained intact and in Russian control.

The platoon of T34 M43s came in very handy. Seeing the Pzkpfw IIILs rampaging in the northeast corner and the StuG IIIG lurking in the debris field near T8, the Russian tanks were able to engage their German counterparts and destroy all of them. One T34 was destroyed, and one immobilized, but all in all I call that an equitable trade.

There was some back-and-forth bloodletting in the O10 and L14 factories, but for the most part I tried to keep my conscripts out of harm's way. Eventually, though, they were backed into a corner and had to try and stand their ground.

Over in the west, not much happened. The Germans took the B17 building, and I made a half-hearted attempt to retake it but backed off in the face of withering firepower.

At the end of the day, the perimeter looked thus: 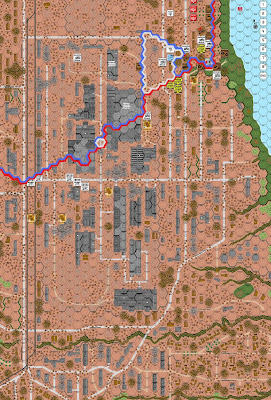