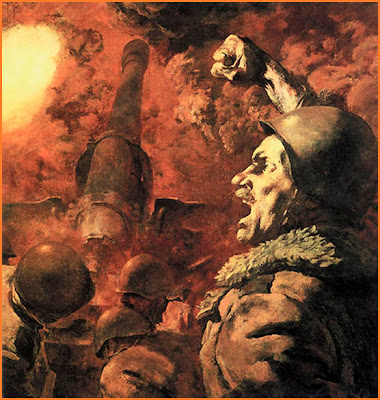 Having survived the previous day with my ELR intact and with a shortened line, I was feeling pretty good. Rolling up 18 CPP made me feel even better.

Immediately upon rolling the 18 CPP, I decided to buy two Medium Artillery modules and fill in the rest as best I could. Ever since the 150mm drubbing I took in our previous game, I've been itching for some kind of payback in kind. I could have purchased two Militia Coys in Reserve, but opted for the higher-morale SMG Coys. The 160 FPP were needed to stiffen defenses around the Power Plant and Chemist's Shop.

My plan is to find the schwerpunkt(s) of his assault(s) and pour on the artillery. There are three potential objectives for the German on which I will focus: the Power Plant (J21), the P18 building and the Chemist's Shop (X9). One observer will go in BB18 (2nd Level) and pre-register hex X7. His objective will be to break up any thrust toward the Chemist's Shop and then to lay waste to any forces occupying the ground lost the day before. If I can miraculously destroy the BB7 pillbox - or better yet, recapture it - I will be ecstatic. The second observer will go in L26 (Rooftop) and pre-register hex C23. His objective will be to pummel any assaulting forces that push toward the Power Plant from the west board edge - which seems likely, given that Germans may now enter anywhere on the west edge from A1 - A22. I wouldn't be surprised if a Sturm Coy, or even a Pionier Coy, charged on from the A22 area into building B23. In a pinch, this observer can also direct fire onto the P18 building and into the rubble field around P19. I have another contingency for an attack up the middle, though (see below).

Over on the riverbank, I expect the Chemist's Shop to be crushed with medium or heavy artillery. Nevertheless, I must defend it with stalwart 6-2-8s and a 10-0 Commissar. It is just too important to give up without a fight. I will backstop the Chemist's Shop with the depleted SMG Coy. Over on the bluff, I wired up Taimyrskaya Street and put a 9-0, 4-5-8 + MMG in a 1+5+7 Pillbox in CC9>AA9 to cover the northern approach to the Chemist's Shop. The mobile T34 M43 is hidden in X12>W11 to cover the approach from the factories. I put an AT Ditch in hex DD5 to prevent an armored thrust/halftrack blitz down the riverbank and backed it up with all three Lt MTRS.

In the middle, nearly all of the Conscripts went into the S20 factory with orders to hold at all costs. The immobile T34 in T14 is already gone; anything he takes with him is a bonus. The P18 building and the rubble field behind are manned by Dummy "?" counters, hopefully to entice the German into diverting forces away from the S20 factory. Two Conscript squads are in P21 to help protect the dug-in tank nearby. My ace in the hole in this section of the map is the hidden 9-2, 4-5-8 + HMG, 4-5-8 + HMG in M24 (1st level). From this overwatch position he can bring fire to bear on the P18 building, the rubble field in front of it, the western flank of the S20 factory, the approaches to the dug-in tank and the Wire in front of the Power Plant - all while effectively shielded from potential German kill stacks. He can also shift a hex or two and be able to support the defense of Power Plant versus an attack from the C25 building.

The Power Plant, like the Chemist's Shop, is also probably going to be targeted by some kind of nasty large-caliber ordnance. Similarly, it needs to be strongly defended nonetheless. A mix of 4-4-7s and 6-2-8s should suffice, with a 10-0 Commissar to keep them in fighting trim. A screen of 4-4-7s occupies the F- and G-hexrow buildings. Over half of these forces are setting up in the cellars in expectation of big explosions. The Power Plant is backstopped by the full strength SMG Coy, which also is tasked with protecting the dug-in T34 in E25 and shoring up the left flank.

I uploaded my setup on VASL, and Dade was kind enough to post his setup as well - just to give me something to think about: 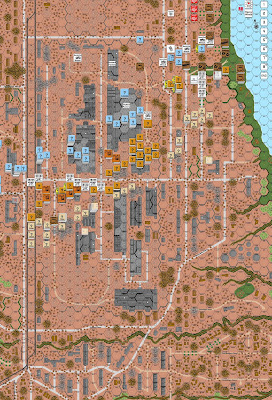 It looks like he's going balls-out for the Power Plant. Dade mentioned that he had preregistered hex J22 with something (probably rocket). If so, it's going to land a nasty punch.

Should make for some good carnage.
Posted by UnitFour at 8:58 PM